In October 1997, when Canadian art galleries still didn’t have websites, Claude A. Simard decided to have an online exhibit on claudeasimard.com. The virtual exhibit featured of all the works he had on display at Montreal’s Walter Klinkhoff Gallery and was promoted on the invitation for the in-person show.

The initiative was so well received that all his subsequent exhibits were also presented online. Today, online exhibits are the norm for art galleries.

Born July 9, 1943, in Quebec City, Claude Alphonse Simard was a painter known for his colourful representation of garden scenes, landscapes, still lifes and the human figure.

After his classical studies at Petit Séminaire de Québec and Académie de Québec, he graduated in 1966 from Toronto’s Ontario College of Art in visual communications. “I received instructions from masters such as Franklin Arbuckle, Alan Colier and Gray Mills. They helped us look at subject matter and feel the emotion it brought. They demanded honesty and passion in the simplest of sketches,” wrote Simard in Inspiration, a book describing his creative process. 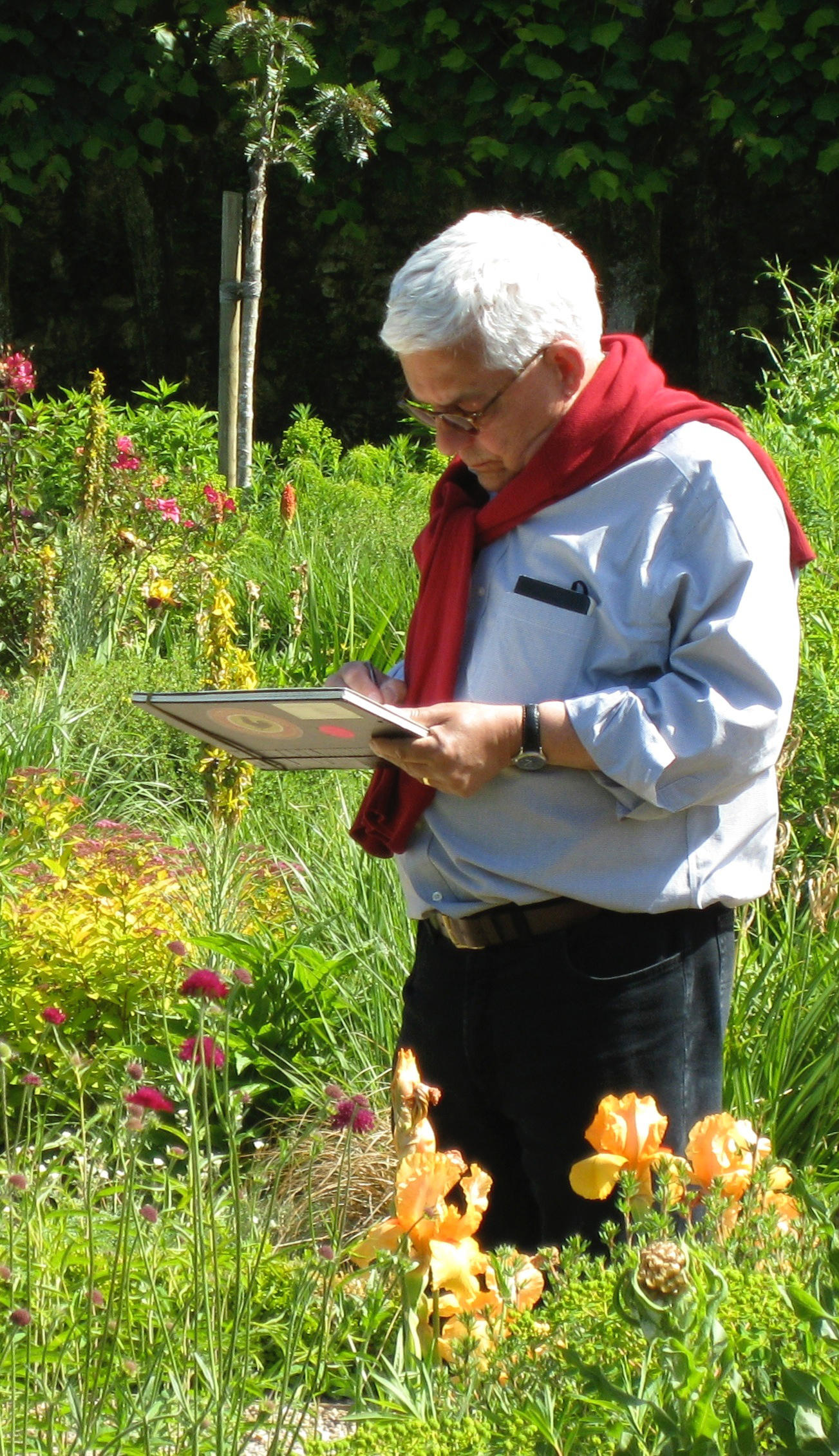 After apprenticing with the design group at the British Motor Corporation in Birmingham, England, Simard began his career in 1966, when he was hired as head of advertising and store design by Maison Simons, a Quebec City fashion retailer. He worked there until 1973 and developed the Simons brand image (a green leaf), which is now a well-known icon throughout Quebec and across Canada. 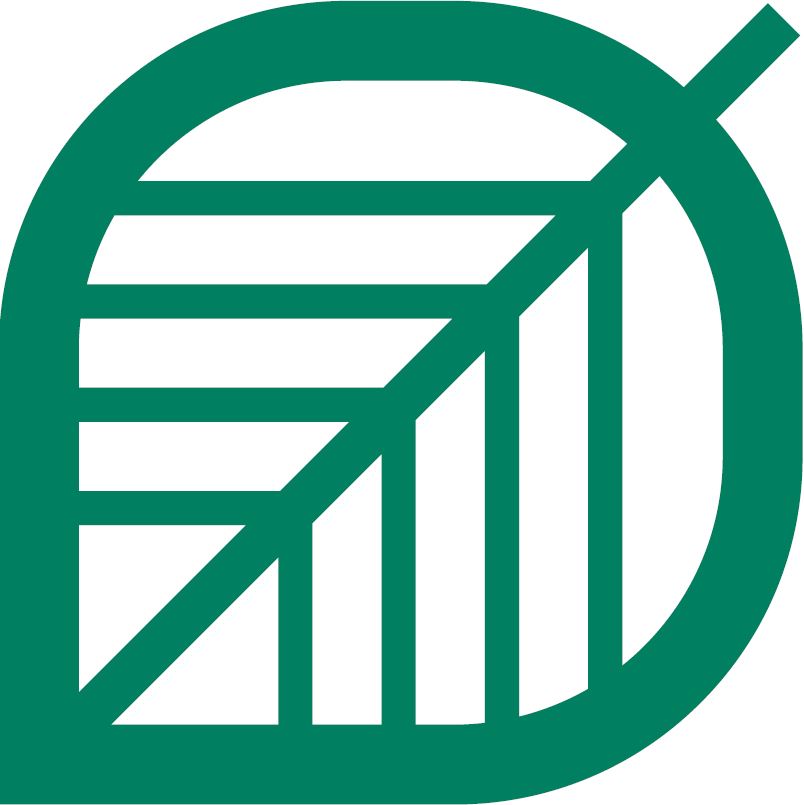 That same year, he founded Groupe Communikart, a graphic design firm that he would direct until 1984. During that time, he won several prizes, including two in Milan for logos designed for Mobilier International (1973) and Scierie des Outardes (1977).

As a co-founding member of the Quebec Graphic Designers Society, created in 1974, he wrote the code of ethics governing the society’s members.

In 1981, Simard was made a member of the Royal Canadian Academy of Arts. He went on to teach at Laval University’s School of Visual Arts from 1982 to 2002. Simard also served as Vice-Dean of the Faculty of Planning, Architecture, Art and Design in 1988/1989. From 1985 to 2001, he led the Ariane Creation research group, where he was in charge of planning and designing the signage on the university campus.

In addition to his activities in graphic design, business and teaching, Simard had always painted, creating a substantial legacy of works.

His paintings were shown in numerous solo exhibits, including a show at the Galerie de la Quinzaine at the Musée du Québec in 1975. In 1991, he was asked to participate in an exhibit showcasing Quebec painters in Paris at Château de Bagatelle.

His work can also be found in galleries across Canada, including the Masters Gallery in Calgary, the West End Gallery in Edmonton and Victoria, the Roberts Gallery in Toronto, Galerie Alan Klinkhoff in Montreal, Galerie Perreault in Quebec City, Galerie L’Harmattan in Baie St.Paul and Galerie Richard Hevey in Ste-Adele.

Simard’s body of work includes five historical murals completed in 1982 and 1983 for Parks Canada as part of the integrated interpretation concept at Fort-Chambly, Quebec. He designed eight stamps for Canada Post, including seven Christmas stamps (1983 and 1987) and one commemorative stamp, Blue Poppy, issued in 1997.

Simard published three books on his two passions, painting and gardening, including his most recent, Inspiration, which he dedicated to his four grandchildren, “so that they might remember all the pleasure we have had together, at this old easel, a faithful companion to our many loves.”

In the preface of the French version of Inspirations, sociologist Jacques DeGuise writes: “I’ve known Simard for a long time and we’ve travelled together extensively. I’m always surprised by his way of looking at the world, his obsession for esthetics, which is not so much a passion for him as it is a way of being. Even on the laziest vacation days, Claude is constantly filling his sketchbooks. And if you read his texts, you’ll note that Simard writes the way he paints. Instead of describing what he sees, he explains how he feels. Like a cave artist, he draws inspiration from everyday life. Why not take a minute to view the world through an artist’s lens and read between the lines? You’ll notice that his paintings and written texts all convey the same message: Even more so than beauty, Claude A. Simard succeeds in painting joy and delight.” 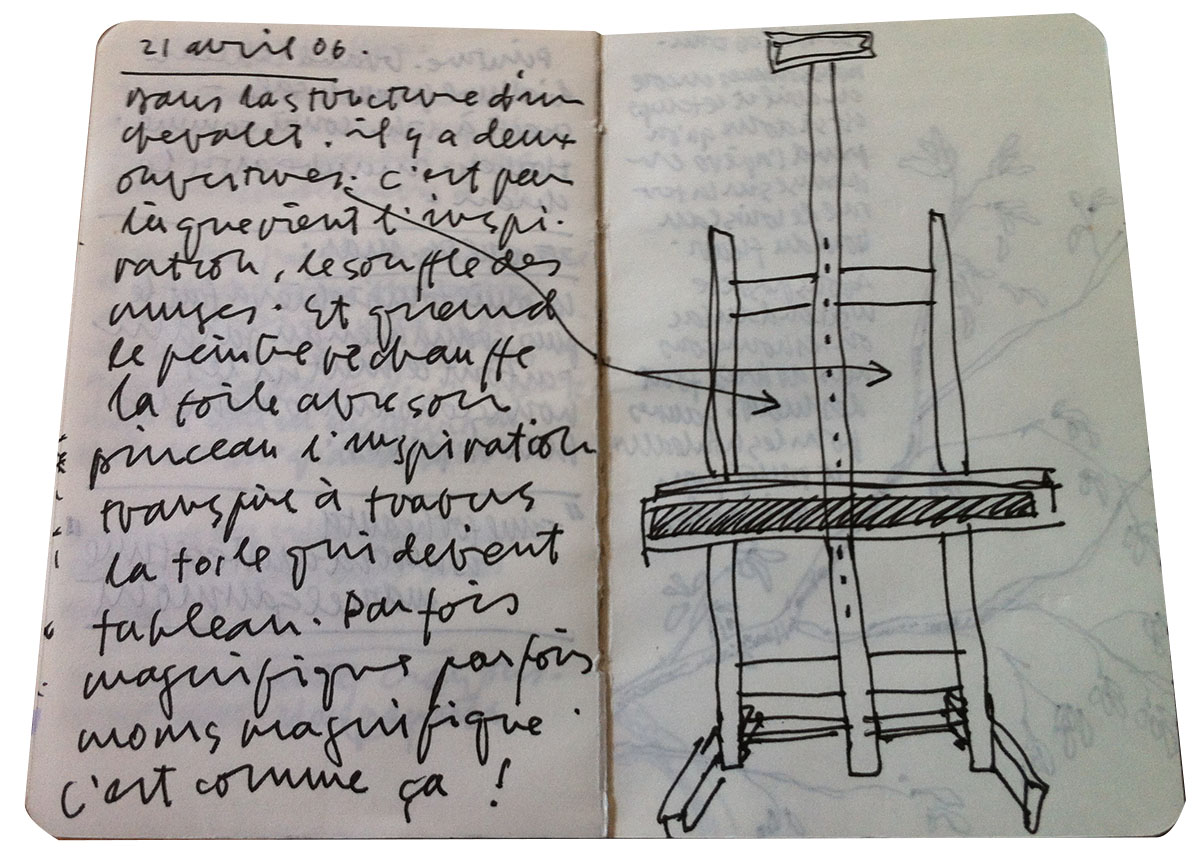