“He first emerged as a painter in the mid-1970s and never stopped producing works after that. He rose to success almost overnight, first in his hometown of Quebec City and then gradually across Canada.”

A few days after Simard’s death, some of his former students published in an article in Le Soleil to express their gratitude to the man they considered a mentor. “ Farewell Mr. Professor ” is a very touching piece.

From September 2016 to 2017, Quebec City held a spectacular yearlong commemoration of Claude A. Simard, the painter, sculptor, graphic artist and teacher, with a retrospective exhibit at the Centre d’Interprétation historique de Sainte-Foy.

Finally, we would be remiss if we did not mention Robert Bernier’s 16-page piece published in the January 2016 edition of Parcours magazine. 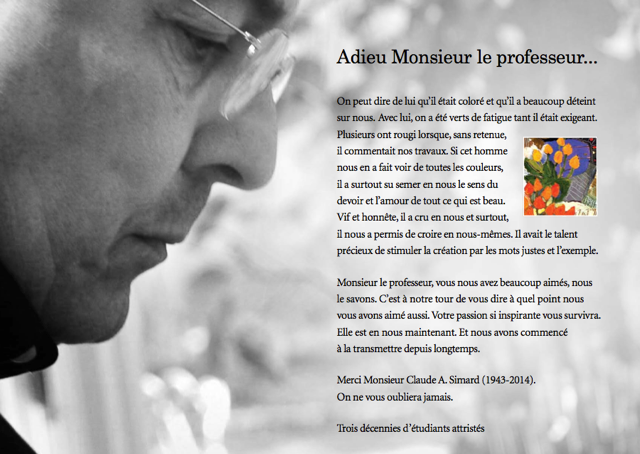 « We can say of him that he was colorful and he has largely influenced our own sensibilities. This teacher was able to ingrain in us a sense of duty and a love for beauty. He made us believe in ourselves. Professor, you have loved us dearly, we know. It’s our turn to tell you how much we loved you in return. Your passion, so inspiring, will live on. It is now part of us all. And, we have long since started to in turn pass it along to others. We will never forget you, Mr. Claude A. Simard.

This exhibit is a tribute to Claude A. Simard. It features approximately 50 paintings and 5 sculptures, as well as a few travel logbooks and notable graphic designs. There are 10 sections in all, covering different aspects of the artist’s life and subjects that were dear to him.

For the occasion, Quebec retailer Simons agreed to make a silk scarf featuring the painting Pois de senteur (“Sweet Pea”). The scarf was sold in stores across Canada. 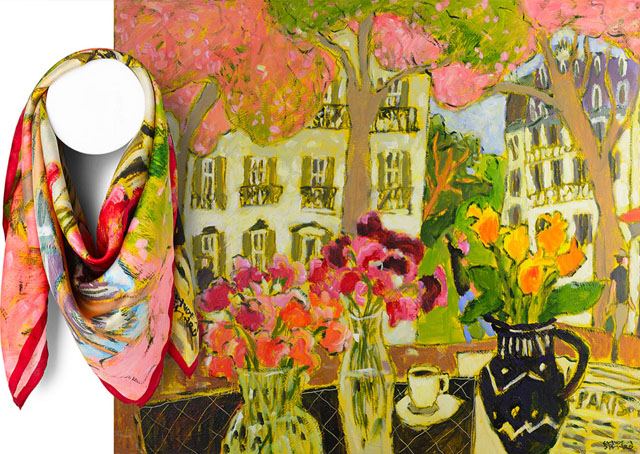 Reproduction of the painting “Pois de senteur” on a silk scarf sold in Simons stores, 2016

Show of traveling sketches at Roberts Gallery Toronto, April 28th to May 16th 2018

The vivacious luminosity of nature! Happiness, joy of living and of painting with audacious colors to attract the eye and extract sentiment! Here are paintings that spread smiles on society. Smiles full of hope and joy! 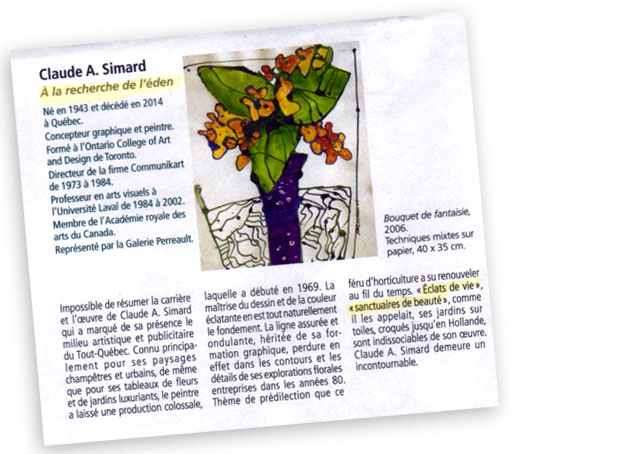 “How do you summarize the career and works of a someone who left such a profound mark on Quebec’s art scene and advertising industry? Known primarily for his bucolic and urban landscapes, as well as his paintings of flowers and lush gardens, Claude A. Simard left behind a vast body of work, with the first pieces dating back as far as 1969.

Masterful drawing and vibrant color define his work. Wavy yet deliberate lines, perfected during his training as a graphic designer, are a constant in the contours and details in the floral explorations from the 1980s.

Flowers would become a preferred theme for the horticulture enthusiast, though over time he found new ways to represent them. Simard’s canvas gardens, which he referred to as “bursts of life” and “sanctuaries of beauty,” would become his calling card and find fans as far as the Netherlands. Claude A. Simard and his works are definitely worth exploring.” 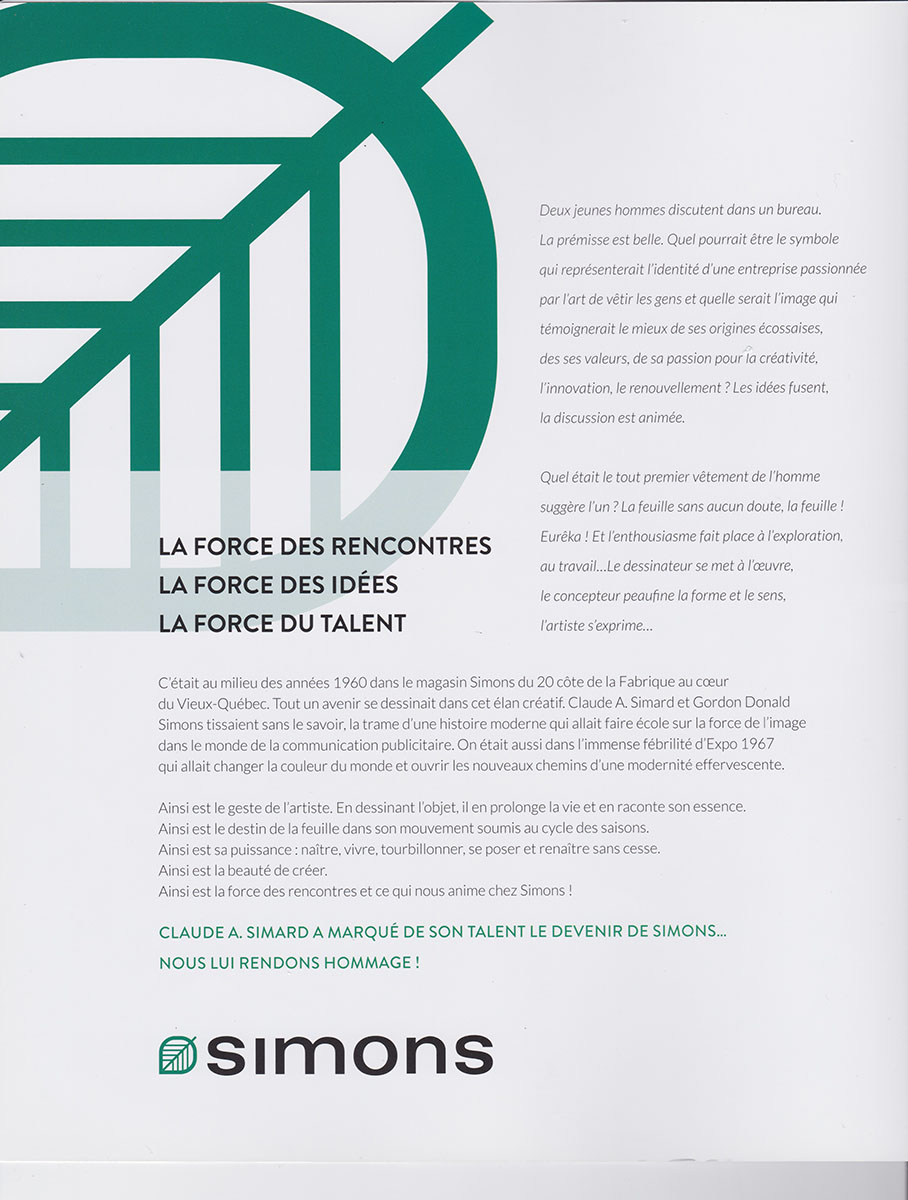 Two men sit in an office, engrossed in discussion. What symbol could effectively represent a company’s dedication to fashion while also reflecting its Scottish roots, its values and its passion for creativity, innovation and renewal? Ideas surface. They meld and merge. A lively discussion ensues.

“What was the first item of clothing that man wore?” A leaf! Surely, it had to be a leaf! This realization set the two men down a path of exploration. The sketcher produced an initial drawing. The designer fine-tuned its shape and attributes. The artist expressed his ideas.

This was in the mid-1960s, in a store located at 20 Côte de la Fabrique, in the heart of Old Quebec City. Little did the two men know that their creative enthusiasm would spark such a bright future for the company. Claude A. Simard and Gordon Donald Simons were totally unaware that the powerful image they were creating would become the cornerstone of a modern success story.

Such is an artist’s work. By drawing an object, he immortalizes it and expresses its essence.
Such is the leaf’s fate as it changes with the seasons.
Such is its power: being born, living, drifting downward, settling and being reborn. Again and again.
Such is the beauty of creating.
Such is the power of encounters. And such is the driving force behind Simons!

CLAUDE A. SIMARD HELPED SHAPE THE FUTURE OF SIMONS WITH HIS TALENT…
WE ARE FOREVER GRATEFUL! 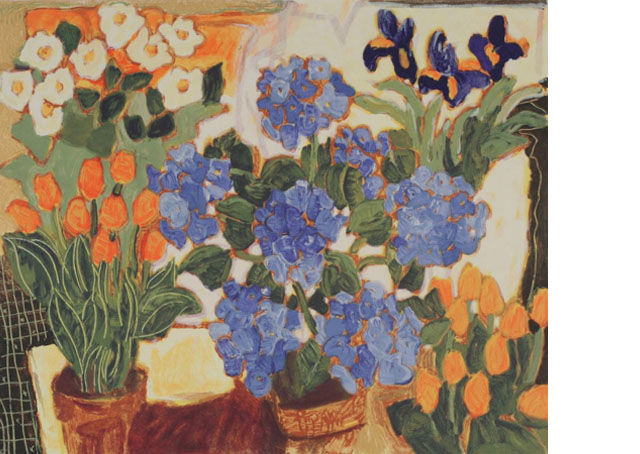